A Missionary is Your Best Self

When I was called to Breda, I didn't realize how close I would be to Belgium. People actually talk about Belgium down here and it makes me so happy. My little Belgian bike knows how close it is to its home :) We get to go to Antwerpen on Thursday for Zone Conference, so I´m pretty pumped. [Emilee is 46 minutes from Antwerpen, her first assignment as a missionary.] 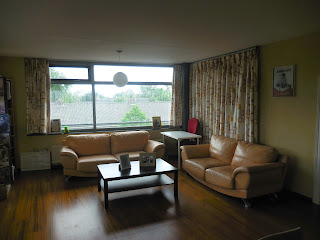 Said goodbye to my good ol´ Utrecht apartment after cleaning and shutting it down for two days straight! I didn´t think we´d ever get it done, but we did. Missin´ Zuster Karlson and everyone else in my amazing District, but I´m really excited to be in another area serving with missionaries and members who I don´t know yet but will quickly come to love.

The ward here is AMAZING. I feel like I´m in America sometimes. Everyone lives so close to each other, and so many different family members are in one ward. We are working with some really cool investigators right now who have learned a lot about the church, and there are some really cool people who joined the church recently.

Also... my companion is from Aruba! Sooo cool. I love Zuster Jaramillo [In the stripe shirt. in the pic above.] Her Dutch is fabulous, she speaks Spanish, and also Papiament, the native language of Aruba.  Also she cooks the best food ever. We´re gonna do Zumba every morning so that should even it out :) We have a lot of fun together speaking English and Dutch and sometimes Spanish, so it should be a good transfer :) She came out just one transfer before me, so it´s been really fun to talk with each other about the mission. She was in a bike accident just a few weeks ago, but she's up and at it again... she said that vacation is over :)

I´m excited to be in this new area. I really know that Heavenly Father knows my situation and that he knew that I needed to experience a change in order to progress and be the missionary and person that I want to be. It's been a little frustrating for me lately,  I don't feel like I've progressed as much as I should at this stage of my mission, but I know that I can be who Heavenly Father needs me to be as I am obedient and do my best to work hard. We were talking about the definition of a missionary in district meeting, and there was one phrase that really stood out to me...


"A Missionary is Your Best Self."

Have the dreamiest week!!!