The Koningsdag celebration [or King's Day, a national holiday in the Kingdom of the Netherlands]
was a success this week.
I think Orange is no longer my favorite color though. Especially not the Nederland Orange. Everyone and their dogs were just decked out in orange and there were so many cans of beer and other beverages just scattered along the city. People are crazy! But it was so fun. The atmosphere of it all was indescribable. It was like a massive garage sale with people selling the most random items. 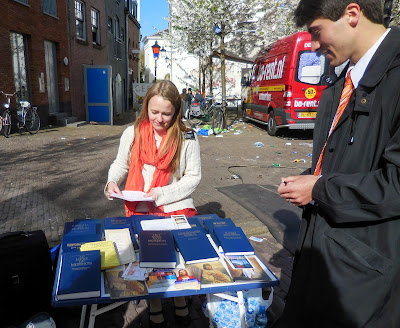 Our entire district of 12 missionaries gathered in Utrecht, and set up a tiny table of pamphlets and Books of Mormon and then placed a rug on the ground with lots of different languages. We made a sign that said Gratis meemen which means everything we had was free to take.  People thought  it meant the Elder holding the sign was free. haha. It was hilarious! 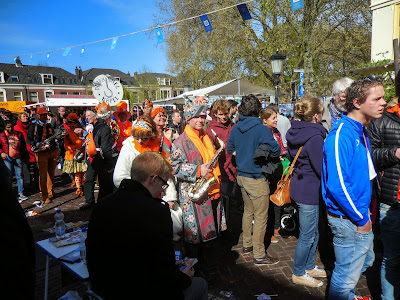 Masses of people walked past our table.
Several people stopped and were interested in all of the languages we had.
We were able to give away a bunch of cards with our website 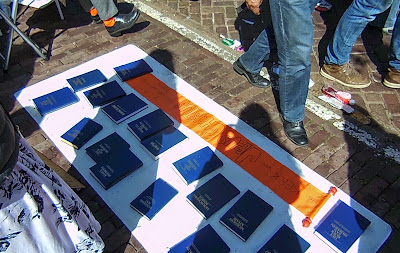 It was a super cool experience to teach people about the Book of Mormon
right there on the street,
and give them an opportunity to have their own copy. 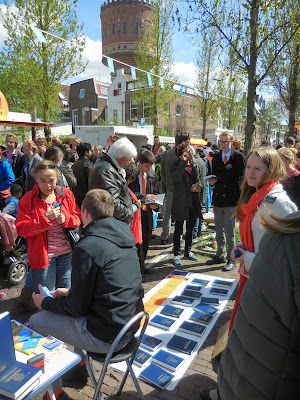 It was super loud most of the time because a live band was right by us haha, but we were still able to talk with a lot of people. We got 7 hours of proselyting hours, and lots of addresses and numbers so we're gonna be super busy this week looking them up. We were pretty excited that the referrals were from our own city! 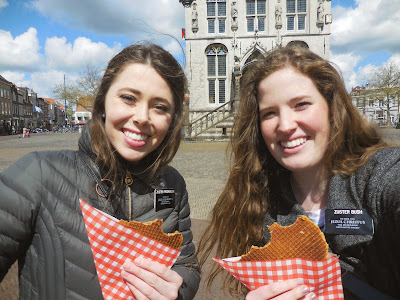 Also... Exchanges happened this week and I went to Gouda with Z. Fredrickson( I met her before the mission and we went to the temple) We both just got done training, so we were super excited to work with each other because she's been out just one transfer longer than me. The day ended up going terribly wrong with transportation- we somehow went to Zoetermeer, Waddinxveen, Leiden, and Rotterdam but we met some cool people on the train, and got fresh stroopwaffels in the Gouda Centrum :)

Soooooo.... in the middle of this week I decided I wanted to work on becoming better at testifying in lessons. I've gotten pretty good at relaying the facts in Dutch but sometimes I forget that testifying and giving personal experiences is sometimes the most powerful thing to bring the spirit. We had a super cool lesson with X who has a baptismal date for May 17th. We suprised him by showing up to his house because it had been 3 weeks since the sisters had a lesson with him, and I'd never met him. We straight up asked him if he was still wanting to prepare for baptism and he expressed his concerns with not knowing how he can focus on the Book of Mormon alone because he truly believes in the Bible and loves it. It was sooooo cool because I've totally been studying that lately in my personal studies, because I'd also like to become better at studying the Bible and the Book of Mormon together. I truly believe that they can support one another, and I know that the Book of Mormon testifies of Christ in a way that is needed. The gift of tongues was present during this lesson, and I was able to speak Dutch with confidence as I testified of the power of the Book of Mormon. At the beginning of the lesson it seemed like he was done with investigating our church, but by the end the spirit worked on him to want to continue and learn more. Really great experience that was cooler in person... But moral of the story. TESTIFY! As we let the spirit work through us, it will help us to say the things in our heart in a way that will touch the person we are talking to. I've always been terrible at expressing myself in words, but I know that the spirit is another language and will help me express myself in a way that will help someone else. 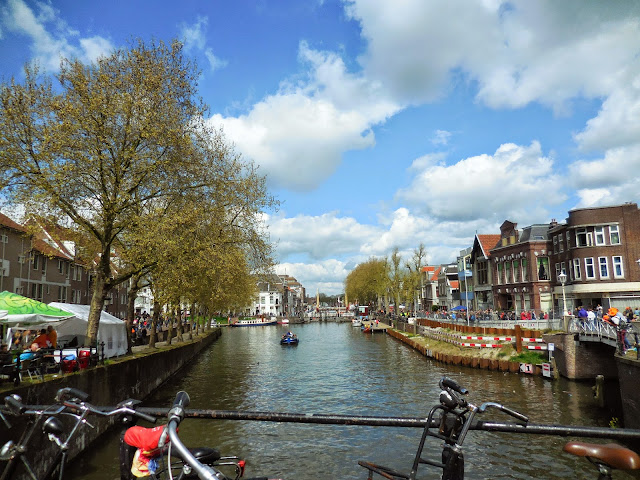 Ahhhh... so many good things happened this week. Update on V. Our lesson with him last week... he told us he'd get back to us about wanting to be baptized our not. His answer this week was YES! He knows it is right to follow Christ and choose to be baptized, but now it's all about having the courage and faith to change his lifestyle a bit. His soccer season ends soon, and he will be able to come to church for his first time. He was not raised with religion at all so this is all really new for him, but the lovely thing is that he knows it's right. He's just working on building up his faith, and learning more about how the Atonement can work in his life personally. He got ambitious and told us he's going to read 70 pages of the Book of Mormon every week so that he can learn more. We're super excited for him, and he's trying to arrange his life to be able to come to church so he can be baptized.

Stake Conference was this weekend in Rotterdam and we got a new stake presidency. Elder Texeira from the Area 70 came to speak as well, and he talked a lot about how we can be using technology to verbeteren our missionary work. iPads are coming folks! He even said that missionaries will be able to be tutored by Return Missionaries in PMG and their language before they even hit the MTC. Crazy stuff.

Grapjes for the week-
The whole week..... haha but really. Lots of laughs and hard work this week. We hopped on the bus and we heard a lady speaking English, and she was visiting from England with her Dutch friend. We started talking with her and the other Dutch people just randomly started talking which was odd because no one ever talks on public transportation, but then this English ladies Dutch friend found out we spoke Dutch too and got super excited, and the whole back of the bus was questioning what we are doing here. We just passed out cards to everyone, and it was a funny experience. It's fun to shock people by telling them we come from America and then speaking Dutch :)

Visited an older couple who are unable to come to church because of health problems. We read the Book of Mormon with them every week and it's always gezellig to hear how they met each other and are still madly in love. We said a prayer before we began reading, and the wife blurts out immediately after the prayer... "Eet smakelijk!" which is what everyone says here saying it's okay to eat now. It means something like bon appetit. It thought it was funny but you probably had to be there..... :)

Well... that's about it! Seemed like the longest week ever since it's been 10 days since we've had a P-day. Love you all and happy May!