So there are a lot of mission terms that we use such as "dying"- when a missionary is pretty close to going home, or "white washing"- when both missionaries are leaving and 2 other missionaries come in etc... But I think the definition for "one and done" is pretty obvious. I be leavin' Apeldoorn after only one transfer. Whaaaaaat.

Crazy news but let's just rewind a bit so you can get the full week.

We had a really fun Gezinsavond (FHE) at Familie Kempenaer this really great families house in Apeldoorn. All 8 of us missionaries were there- 2 sisters, 4 elders, and Elder and Sister Hill. The family has 4 kids under the age of about 13, I think, and it was so fun. We played a little board game we made up with the plan of Salvation, and it was really cool to see how much the kids knew about Heavenly Father's plan for us.
Then that night we traveled to Dordrecht to sleep there for the Christmas Zone Conference the next day in Rotterdam. We learned a lot about improving our teaching skills and were taught a really cool technique of teaching with the pamphlets in a way that gives the investigator more of a chance to speak, and helps us to learn more about them without probing and asking so many questions. It's a really interesting way, that will take some getting used to, but I've already heard about a few miracles coming from it.

The next day we were able to get some pretty good proselyting hours in which was really nice because we have been traveling and doing so many other things this transfer, that it had been a while since we had time to just talk to people along the way. It felt soooo good. It's crazy how much my mindset on talking to people has changed since the beginning of my mission. It has become something that I crave and that has been a blessing. It's not always my favorite thing to get rejected, but as of lately, rejection has been fueling my fire to perfect my invitation to them to learn more. That was definitely one of the blessings of the week. We handed out invitations for the Christmas concert, and we felt good about how we worked that day.

We also did Service with the entire Zone this week at the warehouse of the food bank. A member in Zwolle works there and invited us all to come help out. We organized and packed food for 6 hours and it became addicting. I ended up meeting this really cool lady who also volunteered for her first time, and she plays the violin, and is studying something similar to what I would like to when I get home. It was a blessing to have something in common to keep the conversation going. It is always really cool to be able to have more than an awkward simple get to know you conversation with someone.

Then Saturday and Sunday were spent at the Church the whole weekend. Woooot. We practiced and performed in the Apeldoorn Stake Christmas Concert and it was a success. I ended up just playing along for one song on the violin- Hark the Herald Angels Sing- because the sound of the violin was not that pretty, but a really beautiful song I almost did with 2 soloists is called "Agnus Deu" I might have spelled it wrong, but look it up. It's beautiful. There was a really great turn out. 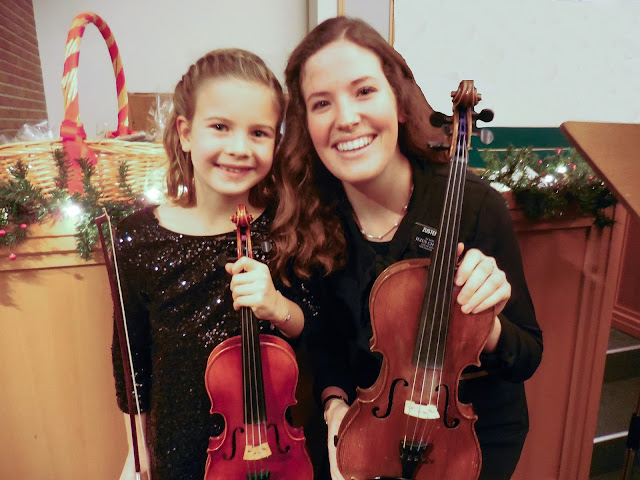 The person that I borrowed the violin from is a friend of Zuster Kempenaer, and she isn't a member of the church, but she came and sang with her eight year old Daughter. Her daughter also played the violin for one of the songs and she was so good! She was the cutest little girl, and reminded me of when I started playing the violin. We of course, had to get a picture together.

Also transfer calls were happening in the middle of the performance so we gave our phone to the Deventer Elders so they could answer it. President called about 30 min. after it started. We joked around that the Elders should answer it and put their hand in the air if we were leaving or not. We kinda assumed we were staying together since we both have 1 and 2 transfers left... but Heavenly Father had something else in mind. I will be going to Zoetermeer with Zuster Maughan  and Zuster Twiggs will be coming to Apeldoorn with Zuster Jensen.

Excited and surprised and ready to make this last one so good!

Christmas packages mailed in November...
sent with a wish and a prayer that all will arrive safely before Christmas.
A long journey ahead... from our home to the Post Office
to across the Deep Blue Sea
to Amsterdam
to the Mission Office in Leiden.

Our Christmas Boxes lovingly placed in bags with handles
to make their final Trek to the Missionaries.
Blessings answered...
and heart felt GRATITUDE to all who provide safe passage.