I just really feel sincere love for everyone I am working with right now and that makes all the difference. This wasn't always so easy for me at the beginning of the mission. It's sometimes hard to love strangers or people that you've just met, but Heavenly Father is pretty good at helping us with our challenges when we have the desire to be better. Charity (Naastenliefde) which literally just means loving your neighbors. That´s what I've been working on lately. It's been really cool to see how that leads to just pure happiness.

Zuster Twiggs and I have been sharing a spiritual thought at the members houses lately where we share with them a little bit about our investigators and we give them a paper with four of our investigators names and ask them to pray for them for two weeks. It´s been a really special experience for us to be more focused on the lives of our investigators and to include them in our thoughts every moment of the day. I've noticed that my studies have become more than just trying to gain knowledge to help me, but I´m gaining knowledge and pondering over personal experiences to help those investigators that I have the privileged of teaching.

The theme of prayer has been a reoccurring theme lately and it's been something I've been trying to improve and work on. Our correlation with our ward mission leader always ends with a spiritual thought, and this time our ward mission leader shared about prayer and how we can have more meaningful prayers. One thing that really stuck out to me was that "Our Prayers can become more meaningful as we counsel with the Lord."  So true. I know that as we set aside time to pray we will make our prayers worthwhile and we will see progression in our lives.

Miracles this weeeeeek:
We saw our investigator C at the train station. Woot Woot. Simple pleasures.

Finally met with E  from Aruba after not seeing him for a couple of weeks. He is a changed man! He's had struggles with weed smoking addictions, and his career as a drummer, but the first thing he told us was that he sees the strength he has received from God through prayer. He´s never been super religious and hasn't made it to church yet, but he notices that he is a changed man because of his trust in God. He looks at himself in the mirror everyday and gives himself pep talks. He´s pretty cool :)

We kind of ran out of money this week because Zr. Twiggs card number got stolen and I used all my money for transportation cause I lost my business card, but blessings came and lots of members just happened to give us tons of food and we have a dinner appt every week. Blessings.

Yes yes yes yes yes. Best day.  We drove up with the Elders and a recently baptized Jovo (Young single adult) to Antwerpen. We went to the forest place and got to wear pants and got to see so many good people. Familie Murton in Breda made tons of food for all of the missionaries that came by and there were tons of other families in the Stake. I got to see a few people from Antwerpen including Br. Schiltz and I called his wife who was at home (she is Irish) and Steffi a super cute jovo that helped me speak Dutch when I was just a greenie and Sister Boegaerts who helped me find my bike. They were all surprised that I could actually speak Dutch now. 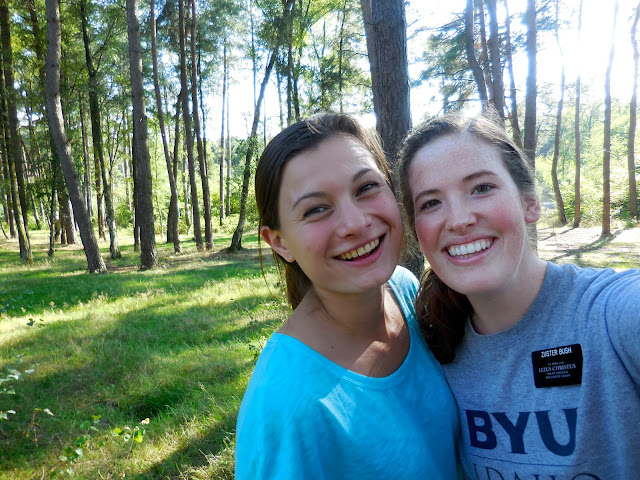 Also... I snatched the Antwerpen sisters phone and called up random people (we aren't allowed to call Belgium from the Netherlands, so since I was in Belgium I got super excited.) I called Agnes my investigator who got baptized the transfer after I left Antwerpen. Since I was all the way up North in Leeuwarden I wasn't able to attend, but she was so happy to hear me on the phone. The miracle was that afterwards I gave the phone back to the Antwerpen Sisters and told them who I called, and they said they had been trying to get in contact with Agnes for WEEKS. She answered the phone the first time I called. Miracle! 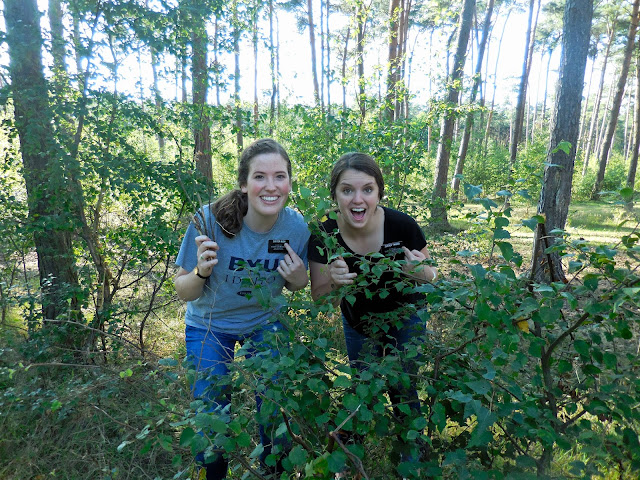 We ended the week by taking some family pictures.
Bush 'N Twiggs is our family name.
We obviously had to take some pictures in our natural habitat.

That's all for this week.