Many can "Beat around the Bush", but No One can Beat the BUSH

I can't believe I'm 20 years old and just barely thought of that phrase. I don't really remember how it came about, but I'm pretty sure we were talking about how blunt Dutch people are and that they don't "beat around the bush" but tell things how they are. And then that phrase came out and it has become my life motto. Just kidding, but it made me laugh.


This week was just weird. But oh so good.
None of our investigators will call us back,
so we just have to find new people to teach I guess!

We had a little bit of time before a dinner appointment to go look up a less active. We were waiting at the bus halte, and we seriously missed 2 busses in a row that we needed. If you don't flag them down here they don't stop. We are super smart and we just stared at the busses assuming everyone else at the halte was getting the same bus as us. We questioned if we even had time to still go, but we waited for the next bus, and got to the neighborhood. We had a tiny map on our camera that we were trying to follow and accidentally took the wrong turn because of construction and got too far away. Now we really didn't have time so all we could do was knock a few houses and then catch a bus back to our appointment. The first house we chose was awesome. We call her lemonade lady, and she made our day worth it. She is Catholic herself, but her daughter is a member of our church and lives in Scotland with her family. Her daughter knows a few of the members in our ward because she visits every so often, and this lady goes to church whenever her daughter comes. She let us in and gave us lemonade and we talked about what we do as missionaries. We met her son and he thought his sister had sent us there, but we laughed as we explained it was seriously a coincidence. Toevallig. She's really open to having us come over again.

Taught a first lesson on the spot. I LOVE when this happens because you have no time to get nervous and wonder what scriptures to share. You have to purely go by the spirit and teach. We met this guy while doing belups. He was behind us listening and it was kind of awkward, but he heard that we were from the Church and wondered which one. He passes our church all the time but didn't think he was welcome to come in. He is about 40 and super lonely in life. Loves the idea that we go door to door and talk to people about religion. He happened to have time right then to listen to us, so we found a picnic table close by and taught him the Restoration. Ahhh it was the best lesson ever because he really just understood everything. Usually the lesson takes a long time because we get really talkative people and it's hard for us to finish and share the coolest part at the end which is the restoration of the church and The Book of Mormon. He still had a lot to share, but none of it led off topic. We were able to give him a deep explanation of The Book of Mormon, and I've never felt the spirit so strong as we testified of the power of The Book of Mormon in our lives. I love that Book, and I love that I get to share my love of it everyday with people in another language. Dutch is hard, and explaining the Gospel simply is tough but I love the feeling I get afterwards of knowing that I can do these hard things through Christ who strengthens me.

Hey. If you haven't seen the new mormon message called "The Lift" then you need to go watch it. Really good and the quote at the end is the best. It is by Elder Christofferson and it says something like "Our souls become more substantial as we serve others... It is easier to find ourselves because there is so much more of us to find."
Loveeeee that. There have been times on my mission where I forget who I am, because so much of my lifestyle has changed, but I truly see that as I serve others I am the best person I can be.

Love you all!
Z. Bush 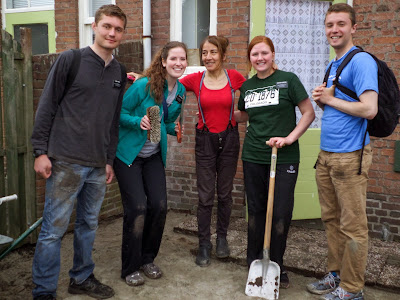 Also people were painting outside our windows outsdie our apt and the asked us if we could open our windows the next morning so they could paint. We decided to plaster pamphlets and cards and church material all over the windows the night before so they would have some nice reading while they were painting. We ended up getting to talk to the painters. They weren't super interested, but we most definitely caught them reading "The Living Christ" while painting. They probably thought we were crazy for sitting at a desk all morning with so many books on it studying....