Thanksgiving, My Growing Testimony and a Medieval Castle...


We definitely did a good job of celebrating Thanksgiving this week!
We made a Pumpkin Pie on Saturday night for our Sunday dinner with the Schiltzs.
It was one of the funniest moments of my mission so far.

We took a couple videos on Zuster Jones camera that maybe you'll see someday. We each made our own pumpkin pie with ingredients bought from an American store by Sister Schiltz. It was hilarious doing a lot of guessing with the measurements because we used one recipe from mom and the other one from the can. One was using the metric system and the other one wasn't! We wished we would've payed attention better in math class. But the pie turned out so good. Miracle of the week right there! Sister Schiltz roasted a 9 lb turkey and finished off the night with pie and practicing for Tuesday night when we go Christmas Caroling! We are sure gonna miss going to their house every Sunday night. We love them! We also helped the Relief Society paint little figurines for a nativity set. It was a super gezellig night and a good way to start the Christmas season! Christmas definitely comes earlier when you're on a mission. Christmas music has been playing for weeks!

I went to Gent again for exchanges with Zuster Johnson. We had such a cool day biking around everywhere and we taught a lesson to a 19 year old that is perfect. She understands the Plan of Salvation so well and it was a cool lesson for us to teach because we didn't really have any time to plan it together.

Alsooooo.... we did service at a members house- Dirk and Cristel! We helped saw wood and pile it all up so they can use it for their inside fireplace. It was the besssst thing to be able to wear jeans. It was funny because Dirk kept reminding us a couple days before that we can't wear skirts, and we have to be strong. haha

Zuster Jones and I had a really cool lesson with "A" this week. It is usually really hard to find her at home, but we called her in advance and she said she'd be home. We got to teach her about prophets and the ten commandments. We then asked her if she would prepare to be baptized. She has had a lot of the lessons and she's been to church twice. She expressed some worries with being angry with people in her life and doesn't want to make that step of baptism with all of it on her shoulder. We were able to testify of the power of the Atonement and the power that Jesus Christ has to make our burdens become lighter and to help us forgive others. I had the feeling to share a Mormon Message with her and it turned out to be really good for her. I was definitely guided by the spirit! I think the vido is called "Forgiveness- My Burden was Made Lighter."

It seemed like we did a good amount of finding this week but with not so much luck. YET. It is good practice for me to learn different comebacks to say in Dutch. One night we went coin contacting on our bikes. Zuster Jones flips a coin and it tell us which direction to turn and we just keep flipping until we find someone walking on the street. Then we stop our bikes and talk to them. I kind of feel like I'm in a bike gang every time we catch somebody off guard, but it's great! I love that it is totally acceptable to do this as a missionary. We catch so many people by surprise because we just hop off our bikes and start chatting!

This week I've done a lot of study about baptism and the Restoration. I've had a lot of chances this transfer to extend baptismal commitments and also to share with others the restored truths of this gospel. We showed our investigator "S" the 20 minute Restoration video and she loved it. I am so thankful for Joseph Smith for being so humble to take the time to pray to Heavenly Father for an answer. I think a lot of the time I assume that Heavenly Father understands the worries in my heart or the things I have questions about, and he does, but there is no way that he can help me until I take my worries and questions to him in prayer. He has his arm extended out to help us, we just need to grab on. I know that we can go to Heavenly Father sincerely with any question we may have, and he will help us to understand. He answers our prayers! I am so thankful for that knowledge.

My testimony has definitely been tested while I've been on my mission but I am learning one step at a time. I am reading in Alma 7 right now and I am trying to really dig deep and learn the principles the Book of Mormon is trying to teach. I'm am so thankful for my relationship with Heavenly Father. He is truly helping me. I know the process of how I can strengthen my knowledge. Sometimes I don't feel very qualified to be teaching these people who struggle with family relationships or health problems or money problems because I haven't really had too hard of a life, but I know that if I strengthen my testimony and knowledge of the Savior Christ, I can point these people to the Savior, the perfect example. I am an instrument in the hands of the Lord... I need to rely on him more.

Thank you for all your words of encouragement. Being a missionary is hard, and sometimes I wonder why I am here but then I remember the prompting I had to come. I am learning so much! My testimony of the Book of Mormon is stronger than ever before. Also my Dutch is surprisingly coming along. It's really hard sometimes but I can see the progression.


Enjoy the pics of  the Gravensteen Castle in the city of Gent,
including our Zone Leader, Elder Bosco's photo bomb. . .
our P-day adventure last week.
This month has gone by so fast! Cazy that it's almost Thanksgiving in America :) I am so thankful for you family! Thank you for being great examples of those who strive to live the gospel. Eat lots of homemade rolls for me :) I'll be eating Surinamese food that day!

Love you ALL!
Zuster Bush

grabbed this image from the net... aerial view of Gravensteen
and a few interesting facts. 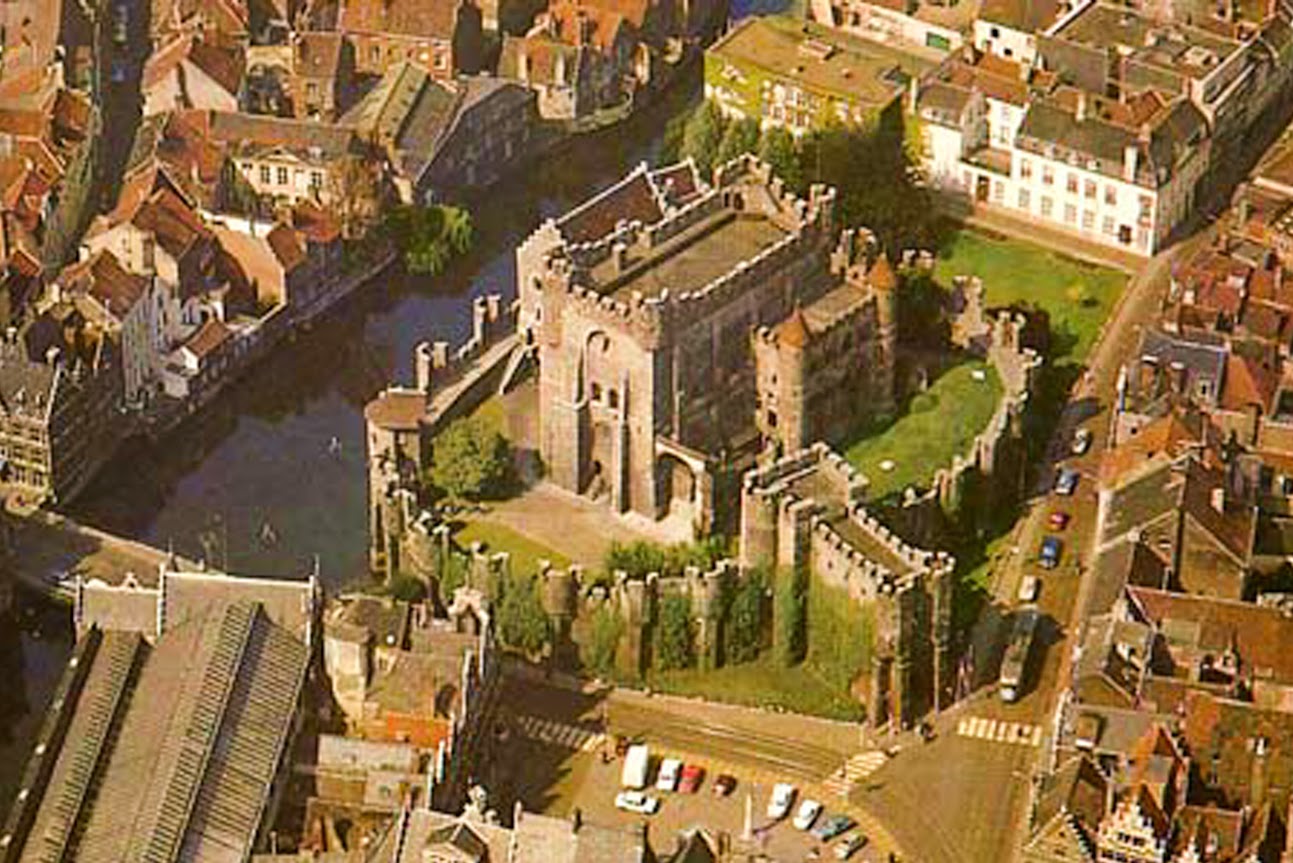 "Christianity began to spread in Europe in the Middle Ages, and religious conflicts were many, With religion very much on his mind, Philip of Alsace had the Gravensteen Ghent castle built in 1180. The Count of Flanders between the years 1157 and 1191, Philip of Alsace was inspired by the castles that he saw while participating in the Second Crusade. The Crusades were intended to spread Christianity throughout the then known world, and the cross that is found on Gravensteen’s front wall is a sign of Philip of Alsace’s devotion."
Posted by Em at 3:57 PM