This week was a lot better than last week and I'm starting to get a hang of mission life. I'm developing good study habits and ways for me to have a grateful and willing heart throughout my entire day. We're seeing lots of success with our investigators and I'm seeing ways to progress. It's been good for me to set smaller goals so I am not so overwhelmed with what I need to accomplish.


I went on Exchanges to Gent again! This time with Zuster Stevens. She will be done with her mission next week. I learned a lot from her. We got to ride bikes to a members house to help them unpack and it ended up being an hour and a half ride. Also the bike I was on was not the best, too small for me and the frame was HEAVY so I seriously almost died. I have never prayed so hard for physical strenghth. I got to the members house and my face was bright red- white girl red head probs- but the lady was super nice and offered me a drink. They always offer drinks, and water is not a drink here. Juice is super popular and if you already have water to drink, they will still ask if you'd like a drink. I just want water!!! haha. Anyways it was amazing to be able to communicate with this lady while we helped her unpack. I was able to say more than I thought! It was just a very chill setting so I was able to ask her about her family and tell her a little bit about mine :) All in DUTCH! Well... Flemish :)

Also. . . I had a cool contacting experience! I haven't gone contacting with Sister Nelson that much because we ALWAYS have lessons, but on exchanges it's fun to contact. Sister Stevens knocked on the first door and they were Muslim. Not interested. I knocked the second door and it was my turn to talk :) I, of course, stumbled over the words but I got my point out! Asked them if they had heard about our church and they said no. Asked if they were interested and had time to talk and they said YES!. My companion helped take it away from there but it was really cool to be able to communicate with someone and have it be a positive response. Turns out they were super interested. It was kind of sad though because neither of us will be there for the next appt with them. I went back to Antwerpen and she will be back in America. It was exciting to experience that though! We even got to read a couple verses from the Book of Mormon with them. All on the doorstep.


Also. . . I got to pray with a Chinese girl who has no idea what Prayer even is! She was a referral that we stopped by to visit. We thought it was a referral for the Family History Pamphlet campaign we've been doing (you should look that up on Facebook, it's cool.) Basically anyone can order this family history pamphlet to help them organize their family trees and then missionaries will show up at their house helping them to use it. ANYWAYS.... She happened to be just a normal referral. We just happened to see a Book of Mormon sitting on her desk. We were so surprised and asked where she got it. She said she was in Germany for a trip and these two "boys" came and gave it to her. She has read a little bit but it's a lot to read and it's hard for her to always understand it. We didn't have a lot of time, but we told her we would love to come back and talk to her about it, and that we could get it to her in Chinese. She was so happy! I love to see people's excitements when they find out we have the Book of Mormon in their native language. Then we asked if we could pray before we left, and her eyes got big and said..."Whaaaat! A prayer? I don't know how to do that." I told her I would do it and we could teach her how next time. It was a cool experience to pray in front of someone who had never prayed before. I definitely chose my words wisely and it helped me to value the importance of Prayer in my life. Too bad this girl lives in Ghent and I was just visiting!!

Last P-day we did a little bit of European shopping! It was a killer actually. So many cute sales and styles in this place. I actually almost bought a coat for 70 Euros but it ended up not being the right size cause I need room for layering! 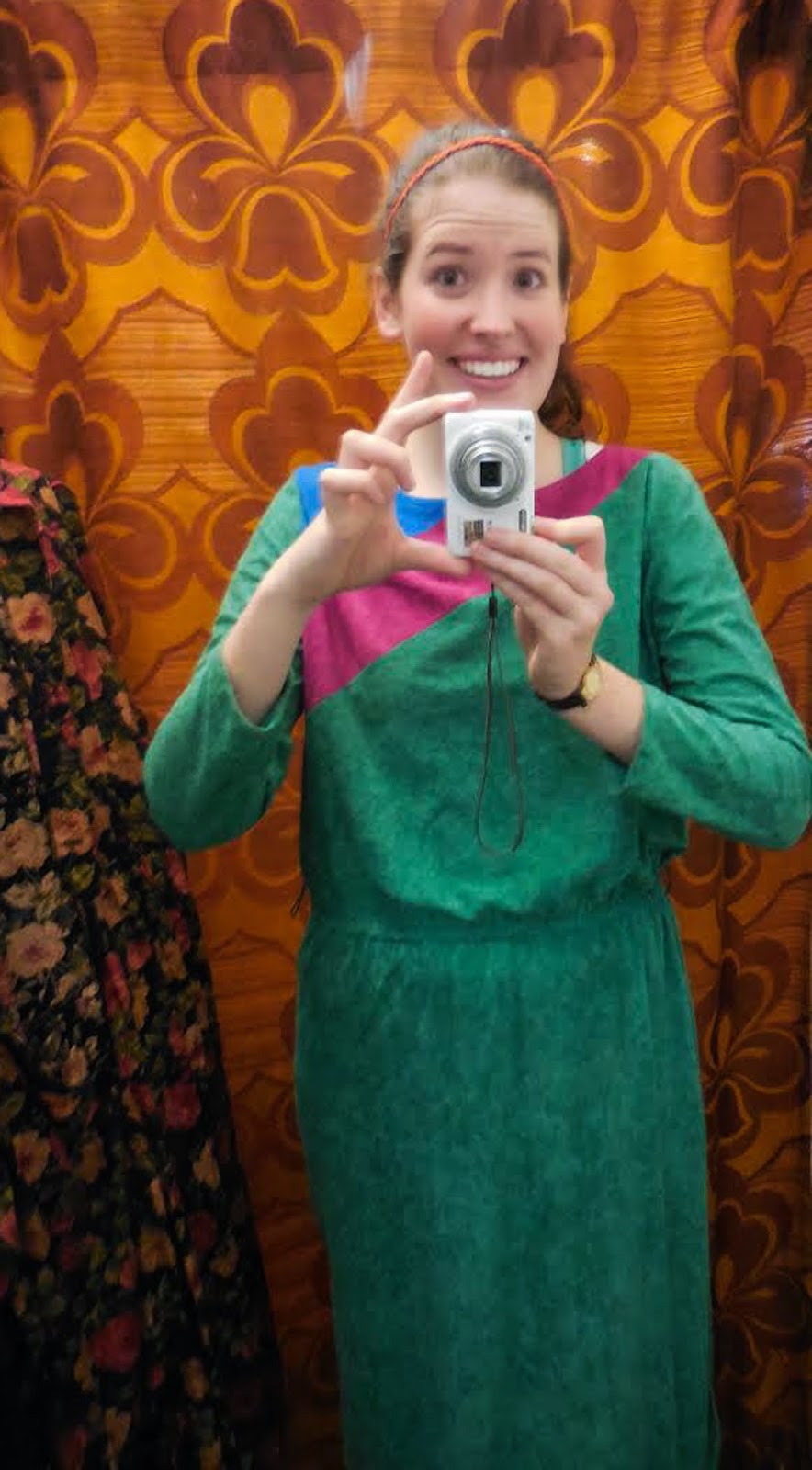 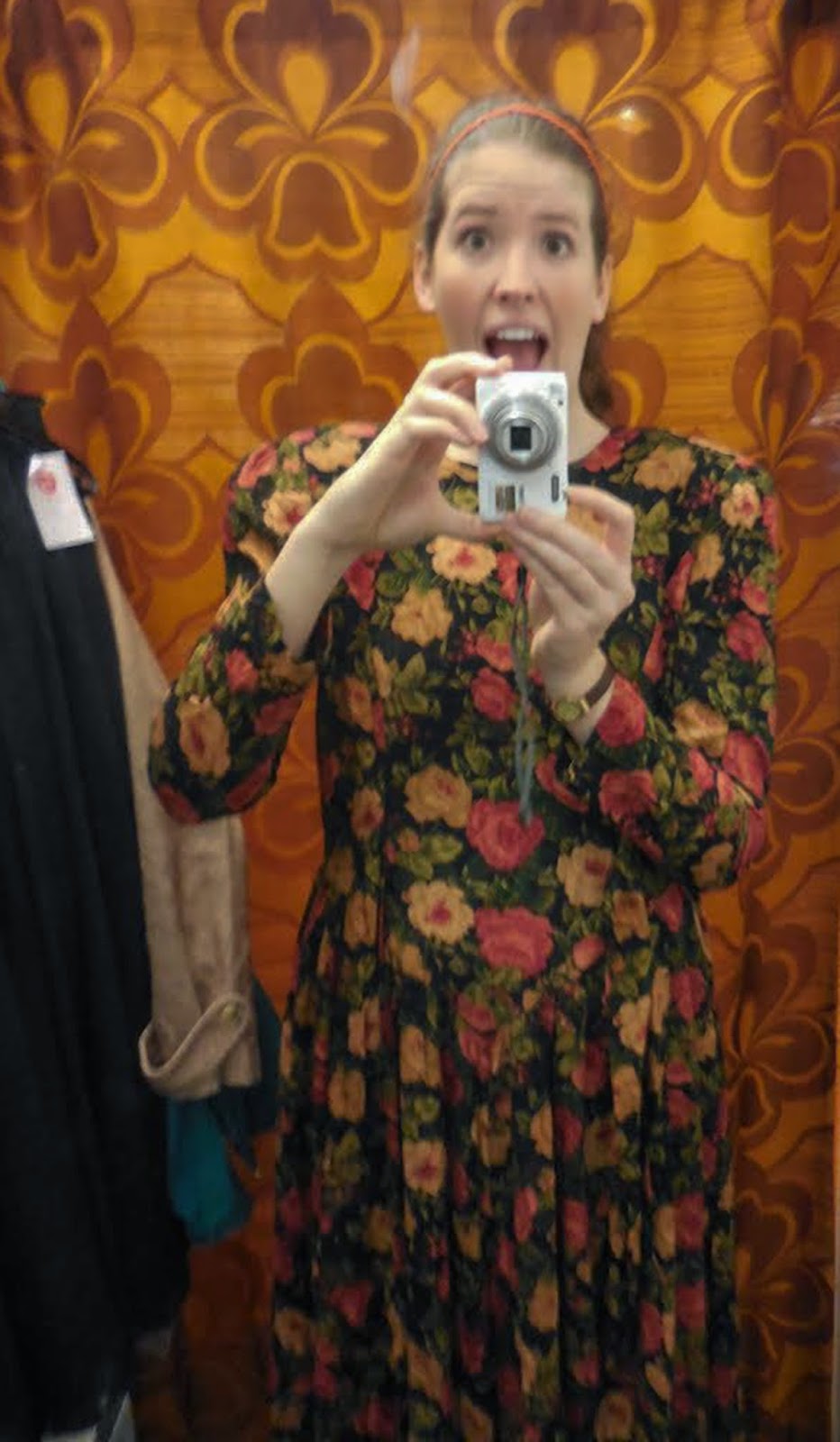 We also went to a thrift shop and it was the coolest thing ever. Mom and Dad, it reminded me of that Vintage shop we went to in Salt Lake. I tried on a few things. I didn't end up buying anything but it was really fun to be a missionary trying on these crazy clothes. If I had a sewing machine I could've made some of it work. haha.

Okay... my Onderzoekers (Investigators)-
Zoek means to search, so that's pretty cool. Searching for the truth!!!


We have 4 baptismal dates set right now.
This week was bomb.
We are on fireeeee here in Antwerpen.

Nadia- She was my first lesson I ever taught in Dutch. She is a single mother who is Belgian. About 40 years old and she is perfect. She always reads stuff before we even ask her too, and she hasn't had a problem with anything. She is set to be baptized on Oct. 26. We always take a cute lady in the ward named Sis. Van Wauwe. She is from the Congo I think, and she has become best friends with Nadia. Blessings are everywhere.

Tom- This guy is the coolest. He is Belgian so we teach him in Dutch too. He came across the church by meeting a BYU girl that was here for the BYU dance tour. His baptism date is set for Nov. 30th because he's trying to stop smoking. He's 23 and working so hard to gain a testimony. He has a lot of support from the ward because their are about 8 other people his age. We call them jovo's. Young Single Adults. It's great to watch him gain a testimony and truly searching for answers and knowing things for himself.

Gavin- He is from Nigeria and probably the funniest person I've met so far. He doesn't speak Dutch so this lesson is taught in English! He met the sisters on the street one night, and it was perfect. He was looking for help in his life, and he found it. "Geen toevall."  No coincidence. He knows a lot about the Gospel so we are just teaching him about the Restored Gospel. He's had a lot of questions that have been really good. He truly loves Jesus Christ  We met with Gavin 5 times this week! Crazy.

Conference was SOOOO good. IT was crazy watching it for myself, but also for my investigators. I truly know that Revelation is real. I wrote down questions that I had, and encouraged our investigators to do the same. It was fun to listen to each talk and try to decide which talk was for a certain person. They were all wonderful and information that we needed to hear. I think my favorite was Elder Uchtdorfs talk about gaining a testimony, and the promise we have from God when we follow the steps to gaining a testimony. It was perfect, and I felt like a proud mother watching one of our investigators taking notes.

Trying to think of anything else that happened this week. So many things...
I ate lots of new food this week. Fried Plantanes, Frekendale? maybe. It's like a Belgian Hot dog. They have Ketchup Curry here and mayo that is waaaay different and better than American Mayo. They use it for their fries. I may never use real ketchup again. Also Belgian Chocolate is amazing. We splurged and bought some for Conference. It's bad that there are so many choices to choose from because then I will never feel content that I've tried everything.


No worries though.
I exercise every morning :)

We made this really good creation for dinner one night.
Rice, sauteed carrots, peppers with spices like garlic, true lime,
and then spinach and basil with this stuff called Maggi.
It's kind of like soy sauce but sweeter and better. It was super good. 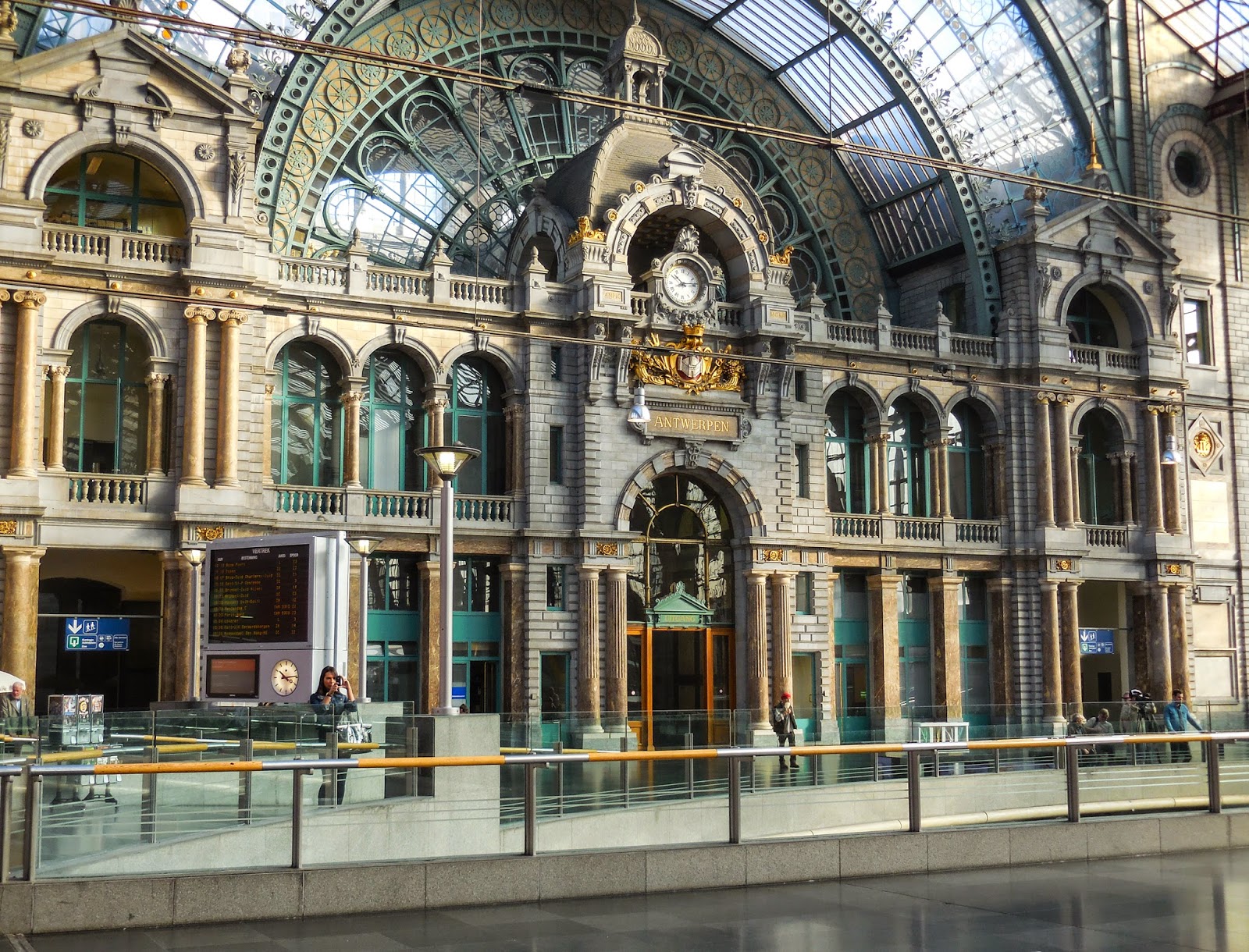 Anyways. . . Belgium is Belgium.
We take lots of public transportation so we see some crazy things,
but I'm so grateful to be here and be serving the Lord! 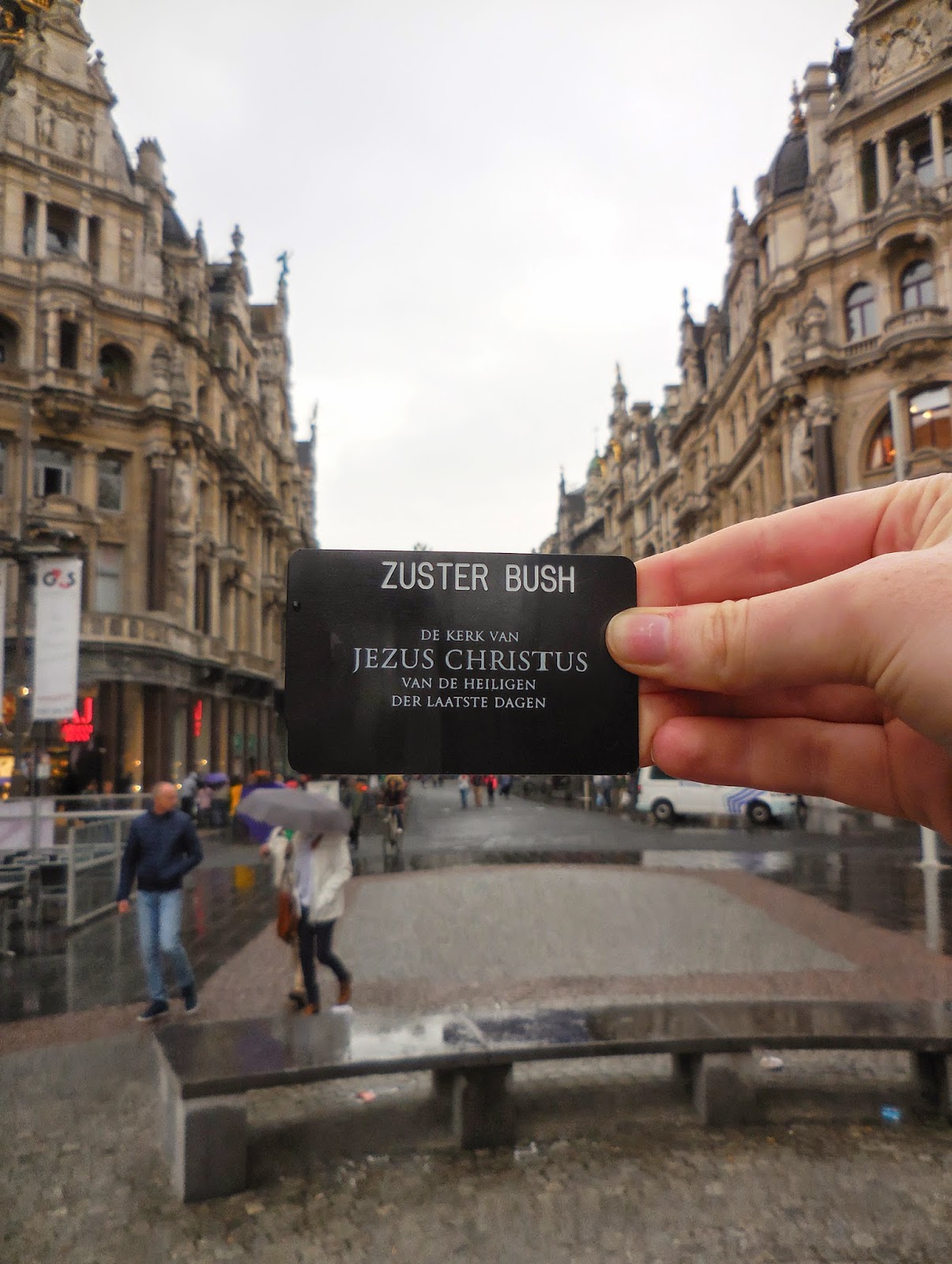 Something funny- I have been taking control of contacting people lately on the cell phone, but mostly in English because... well Dutch. haha. But this time I was texting a member about coming to a joint teach with us. I got brave and did it in Dutch thinking I was super cool. Well I accidentally asked her to come joint teach at 1:00 in the morning. You have to write in military time here and I confused her by not doing that. It was super funny, but it all made sense to her once I responded that I was Zuster Bush. She's pretty cute and understanding of my Dutch haha.

Also I was given a tour of a 93 year old Jehova Witness's house! What an experience. My first tour of someone's house. Apparently it happens often. She even showed us her special shower. What a cutie she was. It was all in Dutch so I was a little lost. It's hard to understand Old people's Dutch, so imagine Flemish!

Well that's all for this week.